What does the project do?

5 Decades is a storytelling project, gathering up people’s memories and stories of the conflict in and about Northern Ireland. It runs storytelling sessions for groups and if participants feel safe and comfortable collects stories through one to one interviews. Sessions with groups typically run between 6 and 8 sessions. Participants have the option to have their stories archived online.

5 Decades has been running now for over 5 years and during that time well over 200 people have participated in the project, both in the immediate area around Forthspring along the Shankill/Falls peace wall and across Northern Ireland. The project mounted a major exhibition in Belfast City Hall, toured the exhibit around local libraries and used it in Forthspring to work with school children studying the ‘Troubles’. It has published a collection of stories, ‘Talking about the Troubles’, which contains 80 stories drawn from individual interviews and reflect on individual experience from the 1960’s onwards.​

​5 Decades provides an opportunity for people to share their experience of living through the Troubles and hear the experience of others. It does this primarily in small groups with the emphasis on ensuring people feel safe and comfortable. The project has demonstrated the enthusiasm of people to recall their memories of the Troubles.

Participant comments include:
‘talking about it helped make sense of what we lived through’;
‘I was more able to explain to my grandchildren what it was like and why it happened’;
‘it was great to hear what people from the other community had to say’,
‘I enjoyed it a lot more than I thought I would’,
‘it was good to have your memories recorded and see them in the book, I was so proud showing it to my children’.

People who visited the exhibition commented that it ‘gave a real insight into people’s lives’, that it as ‘moving, funny and informative’.
If you’re interested in getting involved in 5 Decades & telling your story, then get in touch by filling in this form. Someone will then get in touch.

Johnston had just begun to deliver a ground-breaking OCN-accredited course here in Forthspring – Understanding the Troubles, which he had developed and delivered in collaboration with Education Matters. This was a natural extension of the 5 Decades project – exploring ‘the Troubles’ as perceived by those who have lived through this period. Johnston was engaged and energised by the new project and spoke of the energy in the room as participants discussed and sometimes argued over the influence of key periods such as the Civil Rights movement.

Johnston’s goal in this was not to promote a particular historical or political narrative, but instead to encourage and facilitate a growth in mutual tolerance and understanding as a prerequisite to a collaborative future. This was typical of a man who had devoted his life to public service and more recently in bearing witness to ordinary people in their efforts to understand and recover from violent conflict and to prevent its reoccurrence in future.

Forthspring will try to build on the massive legacy of work which he has left in the field of conflict transformation.

The 5 Decades Project was established to explore the differing experiences and memories of the ‘Troubles’ with the goal of creating a shared, but not agreed, account of the conflict and its impact on local people and communities. Find out more… 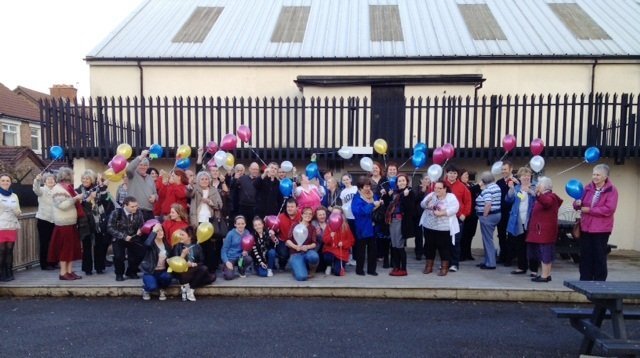 Everyone Made Welcome
Established in 1997, Forthspring Inter Community Group is an inclusive and innovative organisation based in a shared space at the Springfield/Woodvale interface in Belfast. We seek to enhance life opportunities and to enable sustained relationships through a varied range of programmes and activities.